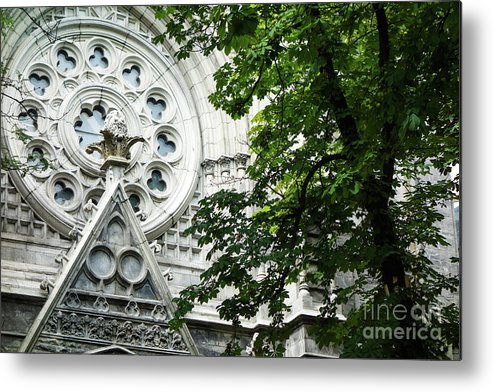 The watermark in the lower right corner of the image will not appear on the final print.

Notre-Dame Basilica of Montreal Exterior metal print by Wilko van de Kamp Fine Photo Art.   Bring your artwork to life with the stylish lines and added depth of a metal print. Your image gets printed directly onto a sheet of 1/16" thick aluminum. The aluminum sheet is offset from the wall by a 3/4" thick wooden frame which is attached to the back. The high gloss of the aluminum sheet complements the rich colors of any image to produce stunning results.

Notre-Dame Basilica is a basilica in the historic district of Old Montreal, in Montreal, Quebec, Canada. The interior of the church is amongst the... more

Notre-Dame Basilica is a basilica in the historic district of Old Montreal, in Montreal, Quebec, Canada. The interior of the church is amongst the most dramatic in the world and regarded as a masterpiece of Gothic Revival architecture. The vaults are coloured deep blue and decorated with golden stars, and the rest of the sanctuary is decorated in blues, azures, reds, purples, silver, and gold. It is filled with hundreds of intricate wooden carvings and several religious statues. Unusual for a church, the stained glass windows along the walls of the sanctuary do not depict biblical scenes, but rather scenes from the religious history of Montreal. It also has a Casavant Frères pipe organ, dated 1891, which comprises four keyboards, 92 stops using electropneumatic action and an adjustable combination system, 7000 individual pipes and a pedal board. Approximately 11 million people visit Notre-Dame Basilica every year, making it one of the most visited monuments in North America.

“My inspiration comes from traveling all over the world: I fell in love with the exceptional things I saw and the remarkable people who crossed my path. My photographic art is my way of giving some of my travel memories back to the world.” WILKO VAN DE KAMP is the author of #1 international best seller The Freedom Project and several other books and e-books. He’s also an award-winning photographic artist, and professional world traveler. His inspiration comes from traveling all over the world. He calls the Canadian Rocky Mountains his home, and the rest of the world his office. He has been capturing our wonderful planet, and it’s beautiful inhabitants, for more than half his life. Wilko has spent his life traveling the world to...